With the collapse of National Socialism and the subsequent division of Germany and Europe, there was a deep break in the history of all German-language literature. Many of the emigrants did not return to Germany permanently (according to T. Mann, E. Canetti, B. Frank, Nelly Sachs, L. Feuchtwanger, EM Remarque), the works of others were marked by the persecution they had suffered (P. Celan, J. Améry, E. Fried). The coming to terms with recent history became the central theme, most impressively in T. Mann’s great old age novel “Doctor Faustus” (1947). The writers who decided to return were already taking sides in choosing their place of residence in one of the zones of occupation.

The literature of the Federal Republic of Germany

1945–1980: At the beginning of West German post-war literature there was an existentially and morally motivated impulse to give an account of the past and the possibilities of language, which, misused by the dictatorship, was now to be used again in the service of establishing the truth. The frequently used terms “zero point” and “clear cut” are metaphors in the sense of an existentialist reversal, for the younger representatives of the war generation they mean a new literary beginning.

The narrative prose in 1945 continued the traditions from before 1933 (with G. Gaiser, W. Koeppen, H. E. Nossack, R. Hagelstange, E. Wiechert); one mostly followed one of the aesthetics of the bourgeois literature of the 19th century or joined newer currents that either used the language of international modernism (J. Joyce, W. Faulkner, R. Musil, J.-P. Sartre, A. Camus, F. Kafka, T.S. Eliot) or cultivated a kind of moderate expressionism, the mixed style of the “New Objectivity” or the realism of the American short story, which was perceived as exemplary (H. Böll, S. Lenz, W. Schnurre, H. W. Richter).

Arno Schmidt’s “Leviathan” (1949) and Elisabeth Langgässer’s novel “The Inextinguishable Seal” (1946) were considered exemplary contributions to the new prose. In this context, it is particularly difficult to distinguish it from Austrian and Swiss literature, since important authors from these countries also lived in the Federal Republic of Germany, were published there and were included in public debates. They also took part in the life of Group 47, which has had a significant impact on German literature with its literary prize, conferences and readings since it was founded. The preferred topic in the 1950s was the mood of post-war society, often with very critical accents: at Koeppen in the novel »Tauben im Gras« (1951), where traditional narrative norms are broken for the first time in German post-war literature, in Nossack in the novel in November at the latest (1955), in Gaiser in the novel Schlußball (1958), in H. Böll’s short stories and novels written by v. a. revolve around the homecoming motif (including »Where were you, Adam?«, 1951), in M. Walser ‘s first novel »Marriage in Philippsburg« (1957). U. Johnson, who moved from the GDR after reprisals, opened up new linguistic and conceptual paths with his novel “Assumptions about Jakob” (1959); With G. Grass ‘ »Die Blechtrommel« (1959) the German novel regained international renown. S. Lenz repeatedly addressed the need for remembering storytelling, most successfully in the novel “Deutschstunde” (1968). A. Schmidt’s oeuvre occupies a special position, as a radical nonconformist who thwarted reading expectations (»Zettels Traum«, 1970).

From the mid-1960s onwards, a generation change became apparent, which v. a. made noticeable in a gradual disintegration of Group 47. The development led from the general politicization of literature to a new inwardness, which, however, did not rule out the (mostly left-wing) political commitment of the authors (Böll, »Gruppenbild mit Dame«, 1971). The narrative attitude also changed, a blurring of the boundaries between author and narrator, of private and public self-awareness characterized Grass ‘ novels of the 1970s, U. Johnson’s »Anniversaries« (4 volumes, 1970–83), as well as the stories by Gabriele Wohmann. P. Weiss, who lives in Sweden offered with »The Aesthetics of Resistance« (3 volumes, 1975–81) a great synthesis of left-wing experience of the century and art program. On the other hand, a new authenticity was achieved with documentary means (according to Erika Runge, M. von der Grün, B. Engelmann, G. Wallraff; Group 61, Werkkreis Literatur der Arbeitswelt). The “Cologne School of New Realism” around D. Wellershoff worked with collage techniques and precise descriptions in order to translate banal reality into literary form (R. D. Brinkmann, N. Born, G. Herburger). H. Heißenbüttellooked for a modern literature through radical changes in language (“Project number 1; d’Alembert’s end”, 1970). Since the late 1960s, biographies have repeatedly been edited with different intentions in literary terms (W. Hildesheimer, D. Kühn,P. Härtling). Important autobiographical works have been published since the early 1970s: such as W. Kempowski’s successful autobiographical novels that document half a century of German history, H. Bienek’s “Gleiwitzer Tetralogie” (1975-82), the subjective, artfully structured prose W. Koeppens (»Youth«, 1976), Canetti’s memories that are based on opposing experiences, Jünger and Elisabeth Plessen. The attitude towards life of the 68 movement expressed, among other things. P. Schneider in the short story »Lenz« (1973). Of the authors who stand outside of all literary trends, H. Achternbusch, C. Meckel, G. B. Fuchs and H. Fichte should be mentioned from the 1970s and 1980s. Within the confessional prose, women’s literature took an important place (Karin Struck, Christa Reinig, Karin Reschke, Katja Behrens, Angelika Mechtel and others), with Verena Stefans “Skinning” (1975) were given a programmatic character. Around 1980 the fathers’ stories became the focus of attention, including with P. Härtling (“Love carried later”, 1980) and Barbara Bronnen (“The Daughter”, 1980). For many authors, the orientation crisis of the second half of the 1970s resulted in intense self-reflections and doubts, in distrust of sensuality and fantasy, e. B. N. Born, “The side of history turned away from the earth” (1976), W. Genazino, “Abolition” trilogy (1977–79), Walser, “A fleeing horse” (1978), B. Strauss, “Couples, Passers-by ”(1981). Writing literary critical essays, sometimes with far-reaching influence W. Jens, Hans Mayer and M. Reich-Ranicki.

West German poetry in the post-war period followed the years of the Weimar Republic, in which classic and revolutionary elements of poetic language had come together to form a “modern classic”. G. Benn with his withdrawal to measure and form (“Statische Gedichte”, 1948; “Aprèslude”, 1955) exerted just as much influence as other representatives of Expressionism. The early poems of Eich (“Remote homesteads”, 1948) and P. Celan’s metaphorical verses (“Mohn und Gedächtnis”, 1952), the hermetic poetry of E. Meister (“Under the black sheep’s fur”, 1953) were decisive due to the imagery of the 1930s for sure. K. Krolow dissolved the magic of nature bucolically, then worked with materials from French and Spanish surrealism and later opened up to American influence. For the literary climate of the 1950s, it was v. a. to incorporate the German poem into the world literary context. All varieties of association, montage and abstract metaphor were popular. The most important contemporary document was that of W. Höllerer published anthology “Transit. Midcentury Poetry Book «(1956). 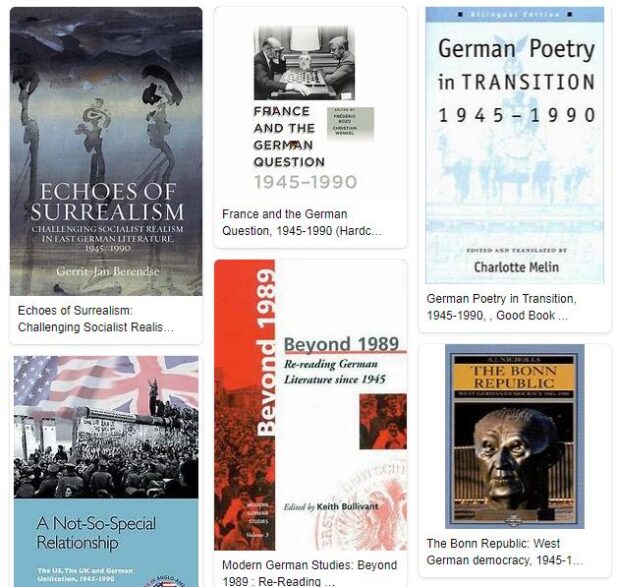