TRAVEL DESTINATIONS IN BOSNIA AND HERZEGOVINA

Sarajevo is arguably Bosnia and Herzegovina’s most popular travel destination and should by no means be missed. Arriving in Sarajevo, it feels like stepping into another world, decades ago. Old dilapidated trams run along the city’s streets, the Baščaršija market area is traded as it has for hundreds of years, and the scars of war are seen in many buildings as bullet holes and in the streets as red-painted grenade traces, or Sarajevo roses. 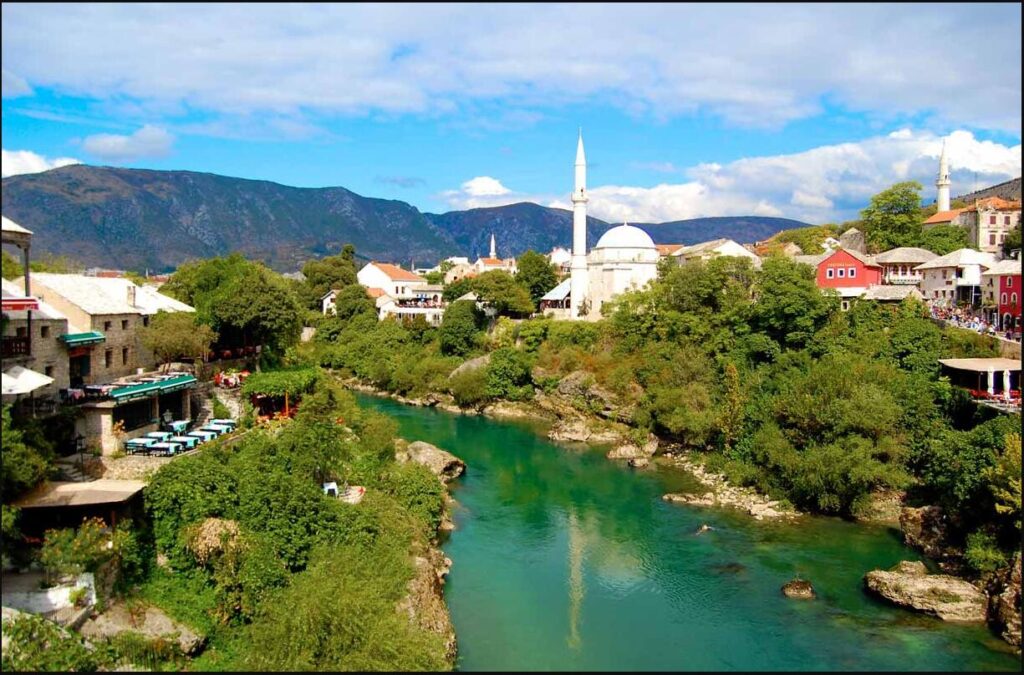 Today, however, Sarajevo is above all a modern city with its main shopping chains, shopping malls, lots of good restaurants and a lively and vibrant urban culture. However, tourists are perhaps more fascinated by Sarajevo’s rich history, which cannot be experienced anywhere else.

For those interested in the military history of Sarajevo, there is plenty to see. Two sites of particular interest are the Sarajevo Tunnel Museum and the Galerija 11/07/95 photo exhibition.

The Tunnel Museum concretely explores the “Tunnel of Hope”, which was excavated under the Airport during the war in 1993. The tunnel has largely collapsed, but tourists still get to crawl at the beginning of the cramped tunnel. Food, medicine and electricity were transported to Sarajevo, which was besieged by a tunnel, and many also managed to escape the war through the legs of the tunnel. The museum will also show a non-verbal documentary about the use of the tunnel.

To get to the tunnel, you have to use both a tram and a bus, but the connections are good. For the more impatient, you should choose a taxi.

Gallery 11/07/95 is a stop photo exhibition of the victims of the Srbrenica massacre. More than 8,000 people were killed in July 1995 in the town of Srbrenica. Impressive photographs reveal the bloody truth about the country’s history. The purpose of the exhibition is to oppose every form of violence. In addition to photographs, the exhibition will also feature related videos.

Due to the brutally realistic images, it is worth coming to the exhibition without children.

Baščaršija – a memory of the past

The Baščaršija region is an absolute center of Sarajevo and a must-see attraction. The old buildings and shops of the Turkish Quarter entice you to bargain for shopping or enjoy local specialties in the many cafés or restaurants.

Here, it is worth visiting at least the National Library, which suffered massive destruction during the bombing, and the entire vast literary cultural heritage was destroyed. Restoration work is still being done to save even a small part. Near Baščaršija you can also see the famous Latin bridge, where the shots that led to the First World War were fired. There are also numerous beautiful mosques and churches in the area.

Mostar and the world famous bridge

Most people come to Mostar because of its famous Stari Most bridge. The bridge over the Neretva River, which had become a symbol of the city of Mostar, was bombed apart during the Balkan War. Now, however, the bridge has been restored and its reopening in 2004 was an important symbol of hope and reconciliation.

Another important attraction in Mostar is the Ottoman-era old town, with its many charming cafés and restaurants, small shops and artisans. Mostar also has several beautiful mosques and churches. The price level in Bosnia and Herzegovina is very affordable for tourists, so restaurants, cafes and cupolas are really worth enjoying – and at the same time supporting local entrepreneurs.

The enchanting waterfalls of Kravice

On your trip to Bosnia and Herzegovina which is a country located in southern Europe defined by countryaah, don’t miss the Kravice Waterfalls, 40 km from Mostar. The incredibly turquoise cool water of the waterfalls and the lush surroundings create a magical impression on this local favorite natural place. The water temperature of the waterfalls does not warm up to bird milk even in the heat, so you can be sure that a dip in the waterfalls will cool down even on the hottest summer day.

Guided tours of the waterfalls can be arranged, but you can also go shopping and admire the rental car. Note, however, that the maps of Bosnia and Herzegovina may not be completely up to date, and the local traffic and road network are best suited for the experienced driver. According to abbreviationfinder, Bosnia and Herzegovina is abbreviated as BIH.

THE BEST OF BOSNIA AND HERZEGOVINA

The Neretva River flows through Mostar.

1. Smell the multicultural atmosphere of Sarajevo
2. Enjoy a cup of Bosnian coffee in the Old Town of Mostar
3. Visit the waterfalls of Kravice
4. Discover the country’s military history